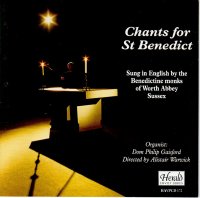 Listeners will be familiar with plainsong recordings from monasteries, sung in Latin, which convey the traditional monastic sense of timeless prayer. There are some other recordings of church and monastic music, sung in English, principally for Eucharistic liturgies.

Here, for the first time on CD, the English Benedictine monks of Worth Abbey, who have been singing their daily monastic prayer in English for over thirty years, have made available to others the sense of prayerfulness that is a characteristic of their community prayer in their spacious Abbey church.

Worth Abbey's organist organist, Dom Philip Gaisford, has skilfully composed most of this music, skillfully combining the best of the traditional tones with the unique demands of the English language.

The Prayer at Midday is accompanied by the hauntingly beautiful sounds of a zither, a stringed instrument sounding like a harp, and which is the sort of instrument thought to have been used in times before Christ to accompany the singing of psalms.

Buy this CD from Amazon

Buy this CD from Amazon